The Newest Thing With Cauliflower

I’m guessing you might think of Cauliflower as kind of a boring, white vegetable that is smelly when you cook it.

But things have changed.

First of all—have seen all the fabulous colors of Cauliflower? 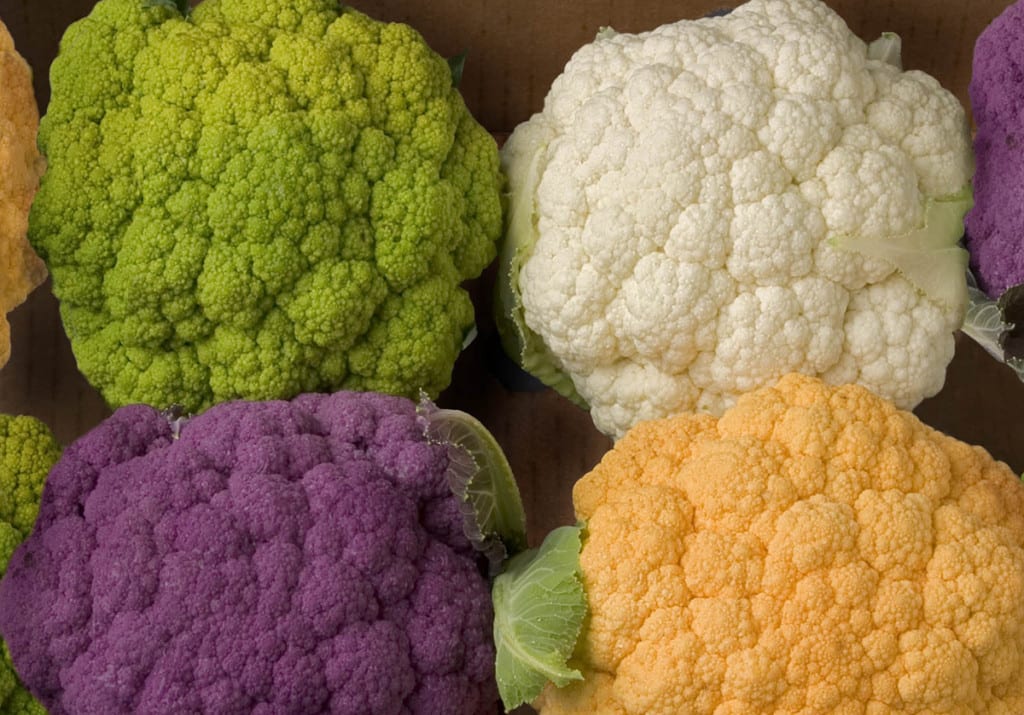 And then there is the distant cousin, Romanesco, which is actually its own vegetable, although it resembles a Cauliflower…kind of.

Although we have been selling baby Cauliflower since the 1980s, you can now find miniature versions of it and Romanesco at farmers markets, upscale supermarkets, and restaurants.

During one of my recent visits to New York City, when I ordered roasted Cauliflower for dinner, I guess I should not have been surprised that the chef roasted and served three colors of it—white, purple and green. It was a nice surprise!

Why has Cauliflower become so popular? In addition to being a cruciferous vegetable touted for its extreme health benefits (other well known cruciferous veggies include broccoli, Brussels sprouts and kale), Cauliflower has a “meaty” texture that is quite versatile to work with.

When one of my vegan friends was honored at a dinner a few months ago, the vegan meal option was a Cauliflower steak! As you can see from the photo, instead of breaking the cauliflower into florets to cook, they cut the head crosswise, roasted it in the oven, and served it like a steak!

Yesterday when I was skimming through one of the dozens of e-newsletters I receive, I found an article in The Shelby Report about what is perhaps the most imaginative and surprising use of Cauliflower—in pizza dough!

As you can see, this very creative company, Absolutely Gluten Free, has found that Cauliflower is a great ingredient for gluten-free pizza dough. (Yes, you can order online!)

What will they think of next?