The Power of Now

I don’t know about you, but for me there sure seems to be a lot to worry about these days.

To start with, I worry about getting through my things-to-do list, preparing for my upcoming meetings, if I’m getting enough sleep, and if am I doing enough for the people on my team. On a larger scale, I worry about global warming, politics, and the Supreme Court. All of these can be a bit stressful and, at times, overwhelming.

That’s one of the reasons I enjoy listening to audio books while I drive. I’ve written before about how Audible has become my best friend and how I love to read, or rather, listen to, autobiographical, self-improvement, and business books, and occasionally a novel. Listening to audio books transports me to a different place even on my short 15-minute commute home each day.

So my friend Tristan asked me if I had read “The Power of Now” by Eckhart Tolle. I admitted that I had heard of Eckhart Tolle, but I had not yet read the book. (In 2008, a New York Times writer called him “the most popular spiritual author in the United States.” So, there you go.)

“Whatever book you are reading right now, put it down. You have to read “The Power of Now” right now! It is incredible,” she said. 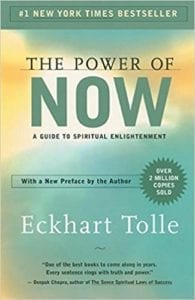 On to Audible I went. Eckhart actually narrates the book himself, and that’s always a special treat when the authors do their own reading, to hear all of the personality and memories through their voices!

Eckhart opens the book by telling his personal story of his struggle with depression until the age of 29 when he had a spiritual awakening. Born in Germany, Eckhart is a spiritual teacher living in Canada. He is not identified with any particular religion, but he has been influenced by a wide range of spiritual works.

After his personal story, the book is a Q&A between the publisher and Eckhart. I think the idea is that the questions which are asked are the same questions you might ask yourself.

I have to admit, Eckhart has an interesting voice and style. I had to turn up the volume in my car, since he speaks so quietly, with a mild accent. I replayed some of what he read many times as it was so thought-provoking for me.

So, I wanted to share one line that really got my attention:

I played that over a few times.

Think about it. Everything happens in the now. So why worry about the past or the future? Stay in the now, and enjoy the moment. It takes away a lot of the stress.

For example, this morning, instead of stressing about my to-do list as I walked up to the office, I slowed down to notice how beautiful the morning was and that we had new plants added to our water-wise landscaping. I felt much calmer. Or when I started to get anxious about not hearing back from a contact, I refocused on what I was working on, rather than worry about getting a response as it is literally not up to me. I had almost forgotten about my earlier concern when I got that response back.

We all really should stop and smell the roses. We’ll all be a lot less stressed if we do.

Why I Do Not Consume Soybean Oil Are You Sure You Want To Choose Shitty? A Recap Of My 2020 Hits & Misses
Previous | Next

Why I Do Not Consume Soybean Oil Are You Sure You Want To Choose Shitty? A Recap Of My 2020 Hits & Misses