Two days ago, I got a text from my sister, Jackie, who runs our company operations.

“We started the day with a major water leak in the men’s bathroom; we ended the day with a pipe breaking in the other side of the office. I checked, and I should have known, Mercury goes retrograde tomorrow.”

Mercury retrograde began July 26 and will end on August 19.

For longtime readers of this blog, you know all about my experiences with Mercury in retrograde in 2014 and 2017. Long story short, because of its orbit around the Sun is faster than ours, three or four times a year the planet appears to move backwards in the sky for about three weeks. According to astrology, Mercury is the planet of technology, equipment and communications, and when it goes into retrograde, everything seems to go out of whack.

Have you been experiencing any odd happenings within the last few days? Computers not working? Things breaking around the house? Poor communication between you and co-workers or your spouse? Contract negotiations not going well? That could be because Mercury is doing a moonwalk.

Jackie and I try to mark on our calendars when Mercury is going retrograde. During those times, we avoid computer upgrades and installing equipment, and are extra careful with communication. We have come to expect flight delays, dropped calls and miscommunication. We have learned to be more patient and forgiving when people around us are short-tempered during the following few weeks. 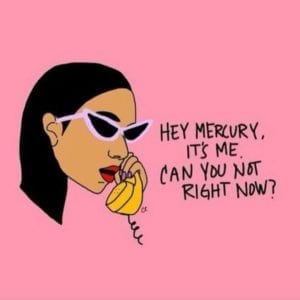 But what’s unique about this particular session of Mercury in retrograde is that Mars is also in retrograde! Mars is the planet of energy, action and desire. It went retrograde on June 26 and it will continue through August 27. Thankfully, it only goes retrograde about once every two years.

Now when Mars goes into retrograde, your plans may go a little haywire or your romantic life is unsatisfying and you feel like you can’t get anything done. Any time any planet goes retrograde, you might ask yourself, “How much is this going to mess up my life?” Well, with both Mars and Mercury in retrograde, the answer is “moderately to intensely.”

If you are curious at all about how the cosmic vibes affect you, I’d encourage you to see how these two retrogrades are affecting your astrological sign at the moment. And if you think the whole thing is hooey, that’s ok too. I’m not going to disagree with you while Mercury and Mars are in retrograde.

During this period of great tension all over the planet, perhaps it’s a good time to take deep breaths before reacting. To anything.

Oh, and my text back to my sister was:

“No surprises there. And Mom had a water leak at her house today too! Things happen in threes, right?”