There’s an App for That

Ever wonder what it takes to launch an app? Or what the inspiration is for someone’s idea for an app?

Well, I got to hear firsthand how it all happened when I was attending my sister Jackie’s birthday party last month.

I was seated next to Conrad, a friend of Jackie’s from Texas, and he enthusiastically told me about an app he launched just three days earlier. It’s called Wait Check.

Conrad and his girlfriend went to their favorite nightclub in Austin, hungry and ready to boogie. But the club was at capacity, and they had to stand in line, 30 people deep. They would only let people in as people left. In his low blood sugar state of hunger, he fantasized about an app that would have allowed him to check with people already at the club or in line to see how long the wait was.

His girlfriend responded, “Great Idea! Now just pitch it to someone you know personally, trust with your idea, and who has the entrepreneurial skills to make it materialize!”

Conrad knew immediately whom to ask: his friend Javier, a local successful businessperson. Javier was on board as he related to the frustration of waiting at restaurants and saw how an app would be the simple solution. They agreed that to meet the market’s need the app should focus on restaurant wait times, but include nightclubs’ too. It would be real-time and exclusively customer crowdsourced. It would be like “WAZE for GRAZE.” Let’s outsmart restaurant traffic together!

This is what Javier shared with me about his thought process:

“When Conrad approached me with the original idea, I thought it had some merit. But I thought that app would only be useful for the segment of people who regularly go to clubs. If we expanded the app to focus on restaurants, we would have a much broader audience. And if we could send those people a push notification once they entered a restaurant, we could prompt them to share wait times with other users.

“So I did some research to see if there were any other restaurant wait time apps on the market, and there were some but none that worked very well. Most of the existing apps are subscription-based and require member restaurants to enter wait times. The primary problem with that model is that very few restaurants participate and the information is not always accurate or in real time. None of them crowdsource for the actual wait time. So for various reasons, people really don’t seem to be using those apps. If we could also design a simple user interface and an app that was easy to use, we thought we might have a winner.”

App Company No. 1 had a lot of impressive terminologies and a slick presentation, but with a ridiculous price tag that would have to be doubled for each Apple and Android platform.

App Company No. 2 was super exciting because the owner/developer really listened to their concept and even added to it by suggesting estimated wait times based on existing Google datasets. Also, the developer loved the idea so much he said he was interested in developing the app for a stake in the business!

App Company No. 3 was full of vague, opaque explanations with nothing concrete to back up claims.

Surprise! They chose the second company.

Conrad got the idea in June 2017 and spoke to Javier within the week. After selecting the developer, they were able to do beta testing in March 2018 and did a soft launch on June 6, 2018—just last month! 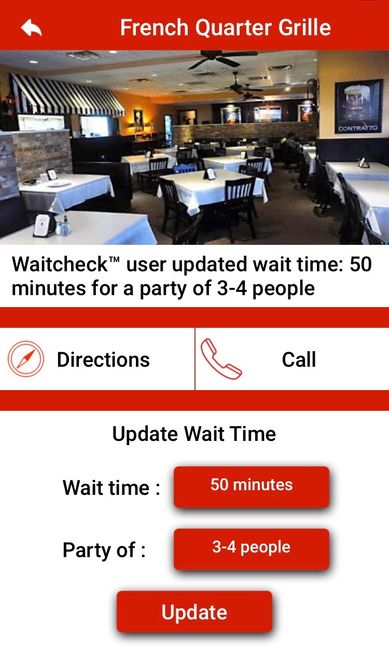 Of course, I’ve downloaded the app and started using it! But I’ve learned so much more than just finding out about a nifty app:

I want to say, “And the rest is history,” but we’re not quite there yet! I know Conrad and Javier are doing marketing and figuring out ways to monetize their app. They would love your feedback. Feel free to reach out to them at info@waitcheck.com.