When my youngest daughter, Sophia, was in high school, each week she insisted that I buy a box of Cuties® Tangerines at my local market. They were her favorite snack. She would consume two or three Cuties® a day until they were gone.

And, if the quality of the fruit I purchased was not up to par, she let me know it. Sophia has a unique ability to quickly taste if something is “not right” or past its peak, so I became very good at inspecting fruit at the grocery store so I wouldn’t get a rejection at home.

Well, now that Sophia is in college, I purchase citrus fruit for my own palate and I have two new favorites.

SUMO® Citrus is a cross between a mandarin and a California navel orange. These fruits have a distinctive “bump” on the top of the orange, almost like the hairstyle of a sumo wrestler. I’m guessing that’s where the name originates (very clever, don’t you think?). 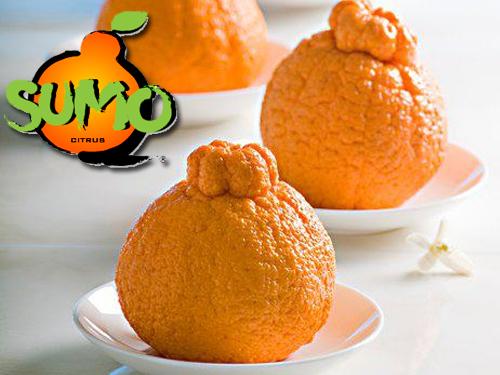 Sumos have a long history, starting in Japan. (You can read here more about it here.) During my travels around to different growing areas, I really enjoyed visiting Sumo growers. They are family farmers who are passionate about growing. When they discovered this one particular tree at the UC Riverside Citrus Variety Collection almost a decade ago, they recognized they had a winner.

Many upscale and natural markets across the U.S. now have Sumos. I’ve seen them in Wegman’s in New York, Gelson’s in Southern California, Central Markets in Texas and Whole Foods everywhere. The season is short, so get them now.

I like them for two reasons: one, they are easy to peel; and two, and most important, they are juicy and sweet. Don’t be put off if the bright orange rind looks old, bumpy or has a pebbly look to it. That’s all part of the Sumos’ distinctive appearance. Even when the outside skin looks old, they still taste fantastic.

My second favorite citrus fruit looks completely normal compared to the Sumo. The mini tangerine, called the “Ojai Pixie,” has a unique, super sweet flavor, contributed partially by the area in which it is grown, the Ojai Valley, about 90 minutes north of Los Angeles. This small valley nestles between avocado and citrus groves, with Central Coast wineries just a few miles up the road.

I had the great fortune to meet Jim and Lisa Churchill, who are Ojai Pixie growers on a relatively small ranch. Jim calls himself “Tangerine Man.” I remember sitting with Jim and Lisa a few years ago on folding chairs in their orchard as they told me stories of their Pixies and the other fruits they grow. When I walked through their orchard, I noticed a few trees appeared to be missing.

“Why are the trees missing?” I asked.

They both looked at each other, and chuckled. Then they whispered to me, “We have bears.”

OMG – I remember my heart started beating very quickly and I looked around. They assured me that while their bear loved the citrus trees, it only came out at night. Whew!

It’s easy to understand why a bear would come out for some late night snacking. The outside skin of Ojai Pixies may be super pebbly, bumpy and a bit unattractive, but they are easy to peel and absolutely the sweetest (and cutest) tangerine you’ll ever taste!

Pixies come from other growing areas now, and their outside skin is rather smooth. But I’d recommend that you seek out the Ojai Pixies when they come into their short season in about a week.

So, even with the freeze that destroyed millions of pounds of California citrus fruit during the last two months, there are still some delicious (but expensive) citrus fruits to enjoy. I hope you will make a point to try both of these, and soon, as their season comes and goes rather quickly.