Vegan Journey: What I learned while shopping

Last night, I got my husband Garry to go with me to Whole Foods Market. I realized I would not survive my vegan journey if all I ate was salad, steamed veggies and fresh fruit. I needed some food with substance.
Before we left to go to the store, I flipped through the recipes in “Forks over Knives” and found a lentil soup recipe that looked good. I have found that having a hearty soup at lunchtime fills me up and gives me energy. So off I went to buy the ingredients and a few other things.
As my friends and family know, Garry is from Texas and is Mr. Meat and Potatoes. He wasn’t even sure where Whole Foods was and was a bit skeptical about what foods we would find.
But I give him credit. As I went up and down each aisle, he helped me read labels and asked a lot of questions. While I was in the produce department looking for fresh mint, a man named Bryan offered to help me. It turns out he is the new team leader for the store, which is equivalent to a store manager.

When he heard I was vegan, he suggested I check out the prepared food offerings on the other side of the store. He told me their store developed a vegan lentil and black bean burger that was a big hit with shoppers. So much so, they sell 60 of them in one day! 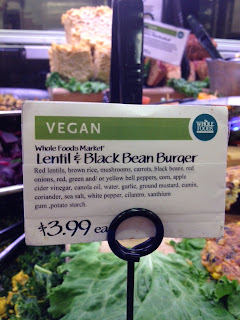 I had fun taste testing some of the prepared foods. Carlos was the guy behind the counter and he blew me away when I started asking him about vegan foods. He informed me that the reason white refined sugar is NOT vegan is because they add ground up animal bones to the sugar to give it a white color. That’s why “raw” or “unrefined sugar” has a brown coloring. I asked him how he knew that, and he told me that all Whole Foods employees go through extensive training before they work in the store.

My supermarket trip was truly complete when I found what I was really looking for: vegan chocolate! I admit I have a bit of a chocolate addiction, so I wondered if I would have to completely give it up.

Almond Cacao L.O.V.E. Cup has only 3 ingredients: Organic Cacao, Organic Sprouted Almonds and Organic Agave Nectar. They are made in Sedona, Arizona and satisfied my chocolate craving, even at 130 calories.  I was a good mother and daughter, and bought extra to share with my mom Frieda and daughter Alex, who are both attempting to join me in my vegan journey.
Enjoying my journey,
Karen