If you work in an office, you probably have one coworker who has snacks at his or her desk. You know, when you get the munchies, and just want a little something, you go to their desk to get a small snack.

For me, that is Becky. She is a member of our sales team and has been at Frieda’s for more than 20 years. She has a drawer filled with healthy snacks, and some mornings I just need a fix to hold me over until lunch. Usually it’s Trader Joe’s Simply Almonds, Cashews, and Cranberries Trek Mix.

A few weeks ago, I stopped by for my snack and her drawer was empty. She was out of trail mix. I was devastated and potentially hangry.” (Yes, it is one of the new words added to the Oxford English Dictionary recently.)

So, the ever resourceful Becky, said, “Why don’t you try these?” 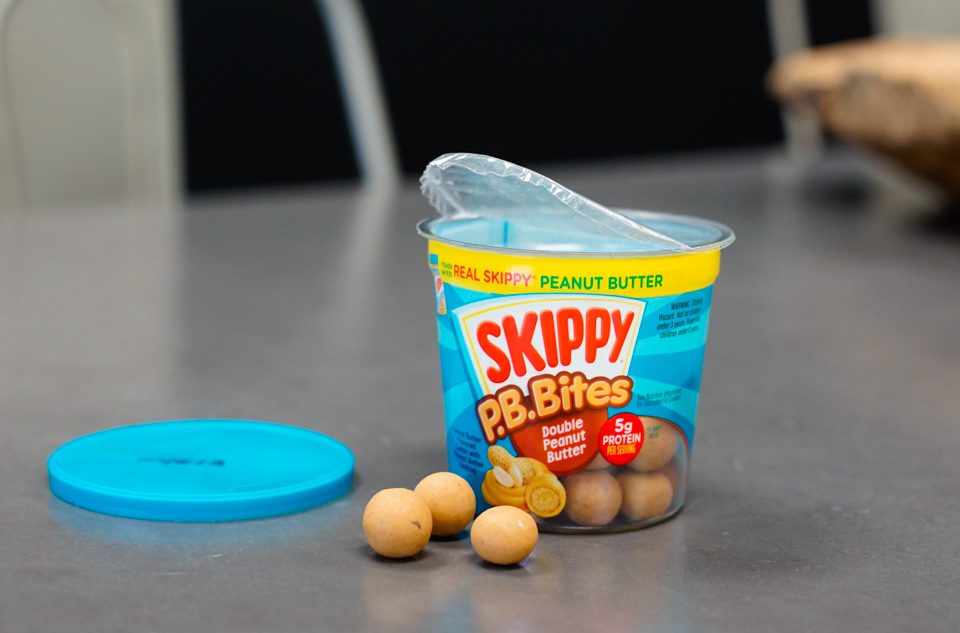 I had no idea what she was handing me, but she started rattling off some of the virtues of Skippy P.B. Bites:

Being the marketing person that I am, I was fascinated with this new product. And I was curious about when it was introduced and the innovative process behind it.

As it turns out Hormel Foods (the owner of Skippy, which it acquired from Unilever in 2013) is well known for innovation. The founder, George Hormel, said it best: “Innovate, don’t imitate.” In 2015 Hormel launched Skippy P.B. Bites, part of its $3 billion pipeline of new products launched since 2000. At that time, the company formed a corporate innovation team to develop “game-changing product innovation that often involves proprietary technology.”

According to one interview, the Bites were inspired by the recent success of unwrapped miniature morsels from top candy bar brands (think mini Reese’s Peanut Butter Cups in a bag).

I was so excited about these P.B. Bites that I went right to my local grocery store to look for them. And I found them on the shelf beside regular peanut butter. I was fascinated by Hormel’s adorable television commercial for the Bites aimed at kids, who are the biggest consumers of and love peanut butter. So cute and relatable:

However, I think Hormel has missed an opportunity to go after another market. And that’s adult peanut butter lovers, who are also calorie counters. And adult snackers.

As much as I like these Skippy P.B. Bites, I do check in to see that Becky’s stash of Trader Joe’s trek mix is well stocked. Because no one wants me to be hangry at my office!