Like most of us, each year when my birthday rolls around (as it did this past weekend), I reflect on the previous year, how old I am now, and ultimately how long I will live. It’s not a heavy-duty thought process, but as we get older and wiser, it’s normal to think such thoughts. And since I was vacationing on Maui, Hawaii, last week, I had plenty of time to contemplate.

While there, I was doing some research for an upcoming speech (which I will talk about in my next blog).

The research included a book published in 2015, “The Blue Zones Solution,” by Dan Buettner. The subtitle is “Eating and Living Like the World’s Healthiest People.” 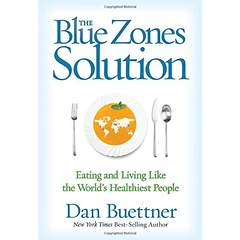 This book came to our attention because we have been deluged in the past year with consumers writing to us about our Stokes Purple® Sweet Potatoes and wanting to find them in their local supermarkets. Many of them mentioned this book and how it piqued their interest in the purple sweet potatoes.

The gist of the book reveals what the world’s longest-lived people have eaten over the past 100 years, with the goal of helping readers lead healthier, more fulfilling lives. That definitely got my attention.

In the chapter titled “A Diet From the World’s Longest-Lived Women: Okinawa, Japan,” one of the highlighted foods is the Okinawan Purple Sweet Potato. This potato is different from the variety we sell (ours are purple-skinned and purple-fleshed), but the benefits appear to be the same. Other top longevity foods from the Okinawan diet include: bitter melons, tofu, turmeric, garlic, brown rice, green tea, Shiitake mushrooms, and seaweeds (Kombu and Wakame).

As I skimmed through the book, my biggest takeaways and conclusions were:

Nothing in the book was earth-shattering, but it reinvigorated my thought process on being more selective about what I choose to eat. A few years ago I was a vegan for 12 months and recalled how good I felt. At that time, by eliminating dairy (cheese, yogurt, ice cream, milk), all my aches and pains went away. I eventually went back to eating fish, poultry, and occasionally some meat because I was lacking energy. (I cannot eat soy.)

Now, I think it’s time to rethink my current food choices and make a few adjustments.

That’s what’s great about having a birthday. It’s a trigger to reflect on how the last year was and consider any changes we want to make in the coming year.

In addition to relaxing and doing some research while on Maui, I was able to enjoy a couple of meals with my favorite Hawaiian chef, Mark Ellman. I highly recommend all three of his Lahaina restaurants: Mala Ocean Tavern, Honu Seafood & Pizza, and Frida’s Mexican Beach House.

Mark grew up in Southern California and moved to Maui with his wife, Judy, almost 30 years ago. He is credited with inventing the local Hawaiian farm-to-market industry, and his food is always fresh, tasty, and inventive.