Our produce industry likes to have a little fun.  In the spirit surrounding the Super Bowl, I found out about a bet that was made in a YouTube video between the Washington State Potato Commission and the Colorado Potato Administrative Committee.  Washington challenged Colorado to a football wager: the losing side was to donate 500 pounds of fresh potatoes to the winning city’s food banks for every point scored, and the losing executive director would travel to the winning team’s city to promote its potatoes! In the end, food banks in both Seattle and Denver received 25,500 pounds of potatoes, as Colorado lost the bet and Washington matched the donation in good faith. (Read full story here.)

The bet surely got the produce industry buzzing about potatoes.  What a way to, pardon the pun, kick off Potato Lover’s Month!

And now I see even more coverage of Potato Lover’s Month online. The Idaho Potato Commission has a network of bloggers who talk about the spuds year round, but more so during February. My blogging friends Erika Kerekes hosted a party this weekend for fellow Southern California food bloggers. The “Potato Palooza” was sponsored by the Idaho commission, as reported by Dorothy Reinhold. I wish I had been in town for that potato party!

Our company has had a role in the potato business, introducing “new varieties” like the first yellow-fleshed potato, the Yellow Finnish, in 1982, and the first baby red potatoes in 1983! Those tiny potatoes were also the first specialty potatoes to be packaged for consumers. 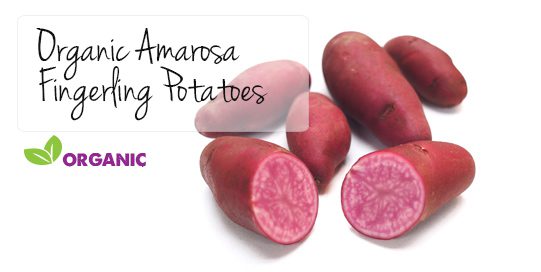 We have so many new varieties of specialty potatoes that it’s hard to pick a favorite. I love to roast the gorgeous, red Amarosa and Purple Fiesta Organic Fingerling Potatoes. They’re just so beautiful and delicious. But when it comes to mashed potatoes, nothing tops Organic Klamath Pearl Potatoes.

So, I hope you’ll make February YOUR Potato Lover’s Month and try at least one new variety.