Yesterday morning I made a phone call to a client in Pennsylvania. As part of the conversation, I asked about the weather. “Cool and raining” was his answer.

I apologetically told him it was going to be 85 in Southern California.

What I didn’t tell him was that I was going to be trekking throughout the citrus groves of the Citrus Variety Collection at the University of California Riverside (UCR) later in the day.

At 8 a.m., my colleague Dorian and I got in my car, and by 9 a.m. we were under a tent in Riverside with 200 other citrus enthusiasts being welcomed by Marylynn Yates, the new Dean of the College of Agriculture.

My first hour was spent listening to two women from the global multi-billion dollar company Givaudan, which is the leader in developing flavors and oils used in our foods, beverages and fragrances. I learned that citrus – lemons in particular – are the base of most beverages, from colas to fruit punches and more. Givaudan recently made a large endowment to the UCR Citrus Variety Collection, to ensure its future viability, because they have found that this repository of citrus germplasm has become their primary source of flavor inspiration worldwide. Over the past few years, Givaudan has brought more than 200 of their flavor developers from around the world to Riverside to sniff, smell, taste and play with the citrus. (Givaudan was recently featured on 60 Minutes. Click here to view “The Flavorists” – second story, about 16:30 minutes in.).

We then sampled more than two dozen varieties of Mandarins and grapefruit hybrids. Growers next to me were whispering to each other what they thought were the best tasting, and which ones had future potential. Some of them planned to tear out their acreage of white grapefruits and oranges and were looking for a better-selling citrus fruit. 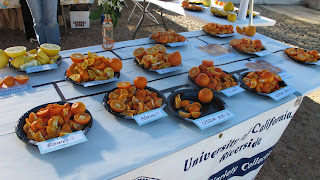 We convened for lunch (barbecue, of course). I was able to snap this photograph of two of the most famous Citrus Aficionados: David Karp (aka the “Fruit Detective”) and Tracy Kahn (curator of the Citrus Variety Collection). These two people know more about citrus fruits than anyone on the planet!

As I turned around to leave, I noticed a man smiling at me. His name tag said “Bob Knight.” He was about my age, and I thought to myself, could it be?

I went to introduce myself: “Are you related to THE Bob Knight? Yes, it turns out he is the son of one of my mother’s first kiwifruit growers! We started to recount memories of the 1970s, when we were both teenagers helping our parents market the first California-grown Kiwifruit.

Yesterday was such a beautiful day in Southern California, in many ways!