Oroblanco: The White Gold of Grapefruits 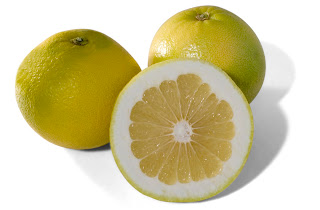 I realize that grapefruit has gotten a lot of bad press in the past few years, mostly because they have been linked to potential medication interactions. Since the main consumers of grapefruit and grapefruit juice have traditionally been those who take medicines (and are over 50 years of age), it’s no surprise that consumption of grapefruit has declined. However, some sources say that the grapefruit drug interaction is limited and a bit overblown by the media, causing grapefruit farmers a lot of trouble.

I still love grapefruit. And since winter is citrus season in the U.S., I’ve started eating grapefruits again, particularly a special grapefruit hybrid called the Oroblanco. This variety is so delicious and low-acid, I have to tell you about it.

Oroblanco (translation: white gold) is a cross developed at the University of California-Riverside in 1958. It’s actually a hybrid between a white grapefruit and a pummelo (the giant Chinese citrus fruit). The amazing thing about the Oroblanco is there is no bitterness! Yes, you read that correctly: a grapefruit that is not bitter!

Russ Parsons, the food editor at the Los Angeles Times, has written several articles about Oroblancos over the years. (here, here and here.) Every once in a while I run into Russ at the local mall or at a dinner at a mutual friends’ house. Just last month, Russ and my mother, Frieda, were emailing back and forth about the virtues of Oroblancos:

Frieda: Russ, one of the first times we ever met — at a Rare Fruit gathering — you and I both agreed that one of the best citrus we had ever come across was the Oroblanco. I remember “sticking my neck out” when people kept asking me what the next kiwifruit would be. I was so firmly convinced that it would be the Oroblanco because of the taste and excellent shelf life — two of the qualities that made Kiwifruit easy to promote.

What happened? In your travels around the country, have you seen any signs of life on the Oroblanco? I have not changed my mind about its qualities and I still think there is an important place for it.

Russ: I’m with you 100 percent. As you know, I’ve been banging that drum myself:

1993: The oro blanco grapefruit, on the other hand, is appreciated mostly for its sweetness. Think of it as a white “pink” grapefruit, though the taste is a bit more complex. It too has a thicker-than-normal rind.

2007: Oroblancos: With an almost ideal balance of sweet and tart and a delicious piney flavor, the Oroblanco is a favorite grapefruit of many farmers market shoppers. Except that technically it’s not a grapefruit but a cross between a grapefruit and a pummelo. Introduced in the 1980s, the Oroblanco has had a checkered history commercially. At first it was praised as being California’s answer to Texas’ ruby and pink grapefruits (it was developed at UC Riverside). But it turned out that in the early part of its season, even though the fruit was ripe, it could still have a deep green peel. This turned off buyers, and gradually farmers stopped planting the trees. But then a funny thing happened: Israeli farmers starting putting in Oroblancos, calling them “Sweeties” and making that green color a selling point. And they started exporting them to Japan, where the sweet fruit found an eager audience. Now, plantings in California are again on the upswing.

Well, Oroblanco is back in season. They do have a green-tinged outside skin, but the inside flesh is pale yellow. They are so sweet and juicy. I have seen them at all my local supermarkets. I encourage you to try one, as I think you’ll enjoy the sweet flavor and the boost of Vitamin C.

I love Oroblancos so much that I featured this Oroblanco Sorbet recipe in my cookbook (The Purple Kiwi Cookbook):

Oroblanco Sorbet
This sorbet is incredibly delicious due to the low acidity of the fruit. You don’t need and ice cream maker to prepare it — a metal pan works fine.

Combine the sugar and water in a small heavy saucepan. Bring to a boil over medium heat, stirring to dissolve the sugar. Reduce the heat to low and simmer for 5 minutes. Chill in the refrigerator for 15 to 20 minutes, or until mixture is close to room temperature.

Freeze the mixture in an ice cream maker according to manufacturer’s directions. Serve, or freeze in a tightly sealed freezer container until serving time. Makes 4 servings.

Tip: To make this ice cream without an ice cream maker, freeze the fruit purée in a shallow metal pan until firm. Break up the frozen mixture with a fork. Beat with an electric mixer until fluffy. Cover the mixture and freeze again until firm. You may repeat the freezing and beating steps for a smoother, finer texture. Let stand 15 to 20 minutes to soften before serving.