If there’s one time when it’s OK to play with your food, it has to be at a produce industry luncheon, of course! I guess I should give you a little background.

Each April, in honor of our company’s anniversary month, we sponsor the Fresh Produce & Floral Council’s bimonthly luncheon. FPFC is our local produce industry group, and my mother, Frieda, was a founding member back in 1963. In 1991 I became the first female chairman. Remember, the produce industry was heavily male-dominated, so even in the early 90s, having a woman chairman was a big deal!

So, back to last week’s luncheon. For a sponsorship fee, we are able to have one or two of our products included in the menu. Each sponsor has five minutes to talk to the audience of several hundred people about what’s new at each of our companies.  This time, one of the co-sponsors, my good friend, Jan DeLyser of the California Avocado Commission, suggested we try something different. She suggested that, because the luncheon speaker was going to talk about our industry’s new partnership with “Sesame Street,” and snacking for young children, we should instead have a “snacking challenge.”

Rather than the four sponsors talking for 20 minutes, that time would be used for each table to come up with a creative snack that would appeal to young kids.

Here’s how the challenge would work. A plate would be set up on each table with products from all four sponsors: baby carrots from Bolthouse Farms, tomatoes from Tasti-Lee Tomatoes, a California avocado, and one of Frieda’s newest products, Purple Snow Peas.  Along with those fresh items, there would also be some seasonings, Greek yogurt, dried cranberries, and sunflower seeds.

I have to be honest here—I was completely skeptical about this. I just couldn’t picture a room full of adults, who usually sit and listen to speakers, getting engaged in creating kid-friendly snacks.

Boy, was I wrong.

The buzz in the room was amazing! Everyone was super enthusiastic about the challenge, and it took quite a few minutes to get everyone back in their seats after the challenge. You can see the photos of some of the finished snacks which we all got to name too.

So, what did we learn? One: it’s OK to play with your food. And, two: adults like a change of pace when attending industry events.

Next time you are in charge of a food event like a company luncheon or dinner party, let your guests get creative and design their own meals! Make it a competition with prizes to bring out their competitive side, then see where things go.

Creativity comes from being comfortable with your inner child. Maybe each of us should let our inner child out a little more often.

The first time we celebrated Earth Day was in 1990. Our company was located in downtown Los Angeles, and in the back of our 44,000-square-foot concrete tilt-up building was a small plot of land, backed up to an abandoned rail spur.

I had a crazy idea: let’s plant some of the exotic fruits and vegetables that we sell and make a garden! We found some like-minded people, such as TreePeople founder Andy Lipkis and some of his fruit-loving friends, and they helped us plant Frieda’s Exotic Fruit Garden.

We had Guavas, Feijoas, Pomegranates, Passion Fruit, seven or eight varieties of bananas, and more! It turned out that the light reflecting off our concrete building created a perfect microclimate in which the bananas and fruits blossomed! (Pun intended.)

So, we launched our garden on Earth Day, April 22, 1990. That year, Earth Day was celebrating its 20th anniversary. That was the same time that we launched our company-wide recycling program and purchased our first cardboard baling machine (to recycle cardboard boxes). Inside our offices, we had a blue recycling trash can for every desk and recycled printed copies through the copy machine. We also encouraged employees to carpool (remember carpool Thursdays?) and actually had some employees telecommute one day a week.

We were accustomed to being trendsetters in the exotic produce business, but we didn’t realize that we were ahead of the curve in terms of sustainability, eco-awareness, and corporate social responsibility as well. 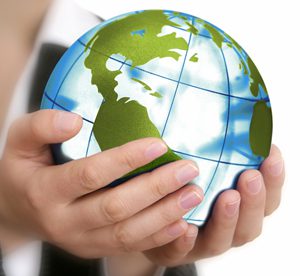 Today, it is commonplace to hear about Earth Day. In fact, our local news website, the Los Alamitos Patch, published “10 ways to celebrate Earth Day All Day” yesterday!

In the past, business people might look down on “tree huggers” or “environmentalists.” Now some of the biggest corporations on the planet are promoting being respectful denizens.

Plastic grocery bags are banned in many cities, and recycling trash cans are the norm in many others. Recycled materials find new life as shopping bags and fashionable purses. Upcycling is also a new trend in which discarded items are repurposed, such as making bottles into light fixtures and turning tire tubes into tote bags.

All of these activities have grown out of the increasing awareness of the need for all of us to be responsible occupants of the planet.

What are you doing to celebrate or acknowledge Earth Day? I’d love to hear about it in your comments below.

I don’t know about you, but when I hear the word “hemp,” I think about something you smoke that’s illegal in most states.

And in fact, if you look up “hemp” on Wikipedia, you will find this:

“Hemp is a commonly used term for high growing varieties of the Cannabis plant and its products, which include fiber, oil, and seed. Hemp is refined into products such as hemp seed foods, hemp oil, wax, resin, rope, cloth, pulp, paper, and fuel.

“Other variants of the herb Cannabis sativa are widely used as a drug, commonly known as marijuana.”

So, when I attended a seminar on healthy eating at a recent produce convention in Vancouver, Canada, you can imagine my surprise that Adam Hart, the speaker and author of “Power of Food,” was talking about eating hemp seeds! In fact, he brought out a jar of his personal stash (no pun intended) to share with the audience of about 100. He talked about hemp seeds as being a good source of energy, almost like drinking a glass of fresh green juice. 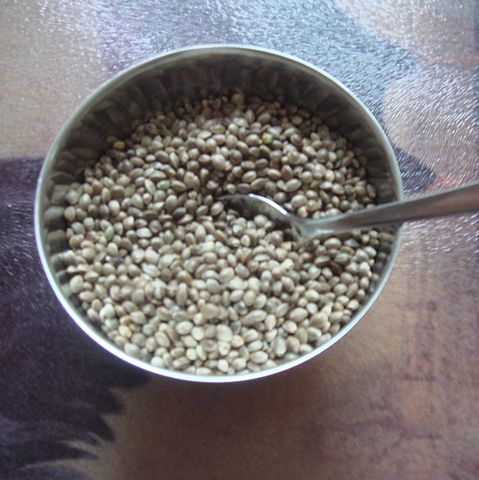 By the way, Adam, who is in his mid-30s, looked AMAZING. He was dressed in his fitness gear, and it didn’t look like his body fat was over 15 percent. You could see that he was strong and muscular.

His story was just as amazing. When he was in his late 20s, he was 40 pounds overweight, depressed, and diagnosed as pre-diabetic. He turned to extreme exercise like rock climbing as a way to deal with his stress, and he changed his eating habits so he could enjoy those activities. You can read his whole story here.

That story may sound similar to those of other inspiring, now-healthy people, but I found his message unique. His philosophy is, “Don’t take anything away from your diet. ADD something to it.”

And, of course, that “something” that he talked about was hemp seeds.

Admittedly, I was a bit skeptical until I took a taste. They were pretty good—crunchy with a mild nutty flavor. The samples he passed around the room were mixed with sesame, sprouted buckwheat, flax, and chia seeds.

What makes hemp seeds good for you is their protein and essential amino acids. So they’re especially great for all you vegans and raw-food eaters out there. And if you are allergic to soy like I am, it’s a good alternative source of protein. Hemp seeds also contain a good amount of magnesium, iron, potassium, vitamin E, and fiber. Hemp milk has the same health benefits as the seeds from which it is made.

I hope I’m not sounding like a vitamin peddler! But like many of my friends and colleagues, each year that goes by seems to bring on a few more aches and pains. I find myself looking for alternative ways to stay healthy and fit, whether it’s exercising more often, trying yoga, or changing my eating habits. So what Adam talked about really resonated with me.

Last week, I ran into another produce person who was in the audience with me when Adam spoke. She called out to me, “I bought hemp seeds! Did you?” I told her I did.

We commented to each other that eating one tablespoon of hemp seeds with every meal seemed to give us the boost we need. All those healthy fatty acids are definitely doing their job of moderating our blood sugar level!

So next time you read about hemp seeds—and believe me you will, as they are one of the top trending ingredients in healthy and vegan foods—consider giving them a try.

In the May 2014 issue of Every Day with Rachael Ray Magazine, celebrity chef Aarón Sanchez chooses our Dried New Mexico Chiles as one of his top supermarket picks to create south-of-the-border flavors. 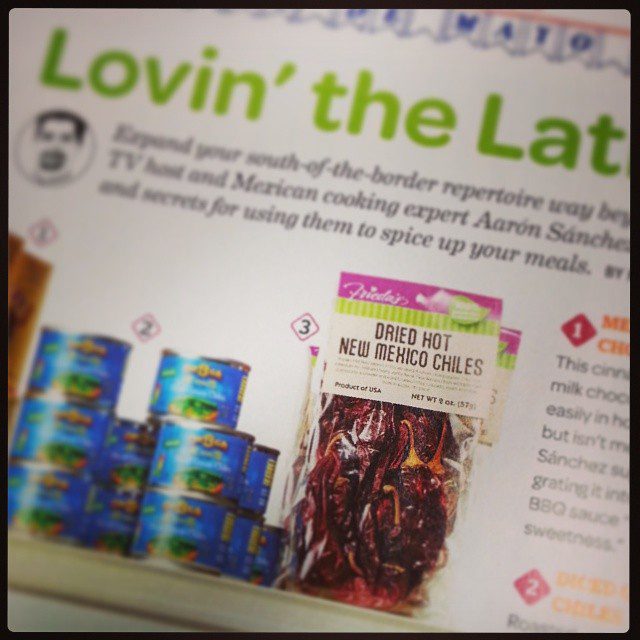 A few weeks ago, when I was on my short commute to the office, a commercial on the radio came on for Walgreens. The gist of the radio spot was along the lines of “Be sure to stop by your local Walgreens for snacks. We have soda pop, candy bars, and chips!” And the spot ended with Walgreen’s slogan.

“At the corner of happy and healthy.”

As you know, I don’t usually publicly call out specific companies in my blog, but there are some important lessons here for all of us. The mixed messaging in that radio spot left me perplexed. Healthy? Sugar-filled drinks and candy, and salt- and fat-laden chips are definitely not healthy.

It seems to me that somewhere in the line of communication between Walgreens’ marketing department and the advertising agency that created the spot, the company’s mission got lost, and nobody questioned the final messaging.

So, being fairly active on social media, I did what most people would do—I took my confusion (and curiosity) to Twitter. (I’m @Karen_Kiwi, by the way.) My expectation was that someone behind @Walgreens would reply back to me, but no one did.

I asked my marketing team to do a little research on Walgreens’ social media activities. It seems that Walgreens only posts “positive messages” and does not address any tweets that might be perceived as negative.

So, I tweeted the same message a second time, and, as expected, I did not hear back. I’m quite sure, however, that I wasn’t the only one who talked openly about Walgreens’ mixed messaging. Within a day, I noticed that the radio spots were no longer about the unhealthy snacks—they are now (finally) aligned with the slogan. Even if Walgreens’ policy is not to respond to negative social media comments, clearly someone is reading them.

This marketing mishap teaches us a few things.

1. An organization needs to communicate its mission, standpoint, and values to everyone it works with—not just within the company. This means articulating both what you DO and DON’T stand for. And being true to your brand and sticking to your mission aren’t just for company employees; they’re for everyone who works with and for your company.

2. Advertising and social media marketing messages must be aligned with your organization’s mission and values—even if you use outside agencies.

3. If your company is on social media, don’t be afraid of criticism and negative comments. The most important thing when something negative is posted on Twitter or Facebook is to respond honestly and in a timely manner. In the world run by Generation C (aka Millenials), the digitally connected 18 to 34 age group, an unanswered query on social media is a big red flag that the company is either hiding something or doesn’t care about its customers.

Lesson learned for me: don’t be afraid to share your observations or opinions even if it’s just on Facebook or Twitter.  You never know what impact you will have! 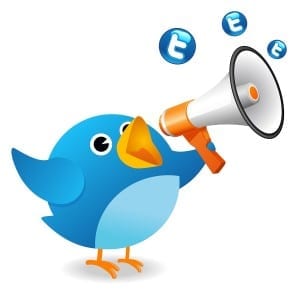 Have you had a similar experience with organizations that send mixed messages? I’d love to read your stories, so please feel free to comment below.