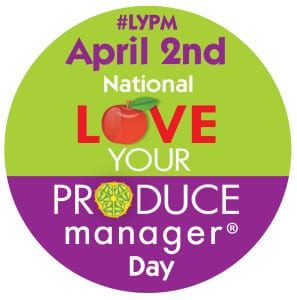 LOS ALAMITOS, CA (March 2015) — Produce managers play an important part in changing the way America shops—and eats. They are the unsung heroes of the healthy eating revolution, quietly playing a key role in increasing fruit and vegetable consumption just by helping us take home the freshest produce. After all, according to a recent survey by Packaged Facts, three out of four shoppers choose where they shop based on the produce department.

To encourage industry participation in raising awareness of this holiday, a donation will be made to United Fresh’s “Let’s Move Salad Bars to Schools” program by Frieda’s Specialty Produce on behalf of produce companies, industry organizations, grocery retailers, and growers who use the #LYPM hashtag in a Facebook, Twitter, and/or Instagram post, or mention Love Your Produce Manager® Day on their websites. Love Your Produce Manager® Day messages must be posted by 11:59 p.m. on April 3 to be counted.

Additionally, Frieda’s is hosting a public social media giveaway to encourage shoppers to show their appreciation for their Produce Managers from Wednesday, March 25, through Thursday, April 2. For a chance to win a prize for themselves and their Produce Manager, shoppers can post a shout-out to their favorite Produce Manager on Facebook, Twitter, and Instagram with hashtag #LYPM. Three sets of winners will be announced on April 3.