Demystifying different types of purple-fleshed sweet potatoes, one tuber at a time! 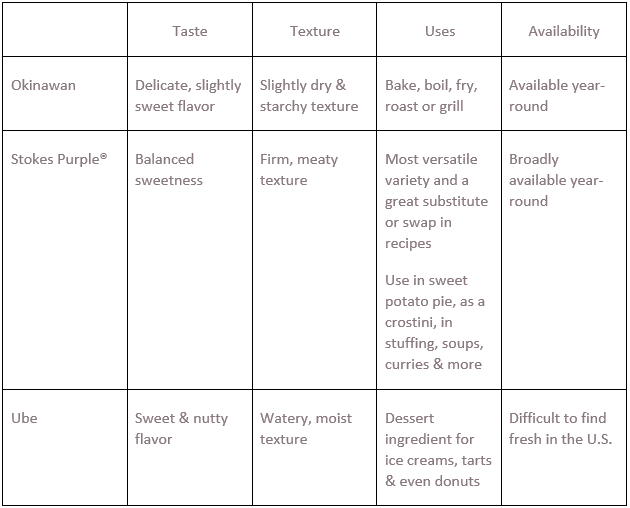 The three main types of purple-fleshed sweet potatoes consumed in the U.S. are Stokes Purple® sweet potatoes, Okinawan sweet potatoes, and Ube (pronounced OO-beh). Shoppers and foodies alike often confuse these three varieties based on skin color, flesh color, different names and even incorrect internet images. As a matter of fact, one of them is not even a sweet potato at all, but a true yam. (And no, a yam is not the same as a sweet potato, but more on that here.)

Take a look at what differentiates each variety.

Exclusive to Frieda’s, these unique Stokes Purple® sweet potatoes have a firm, meaty texture and just the right amount of sweetness. They are a good source of vitamin C and contain a high level of anthocyanins—the antioxidant compound also found in blueberries that gives this potato its purple hue. 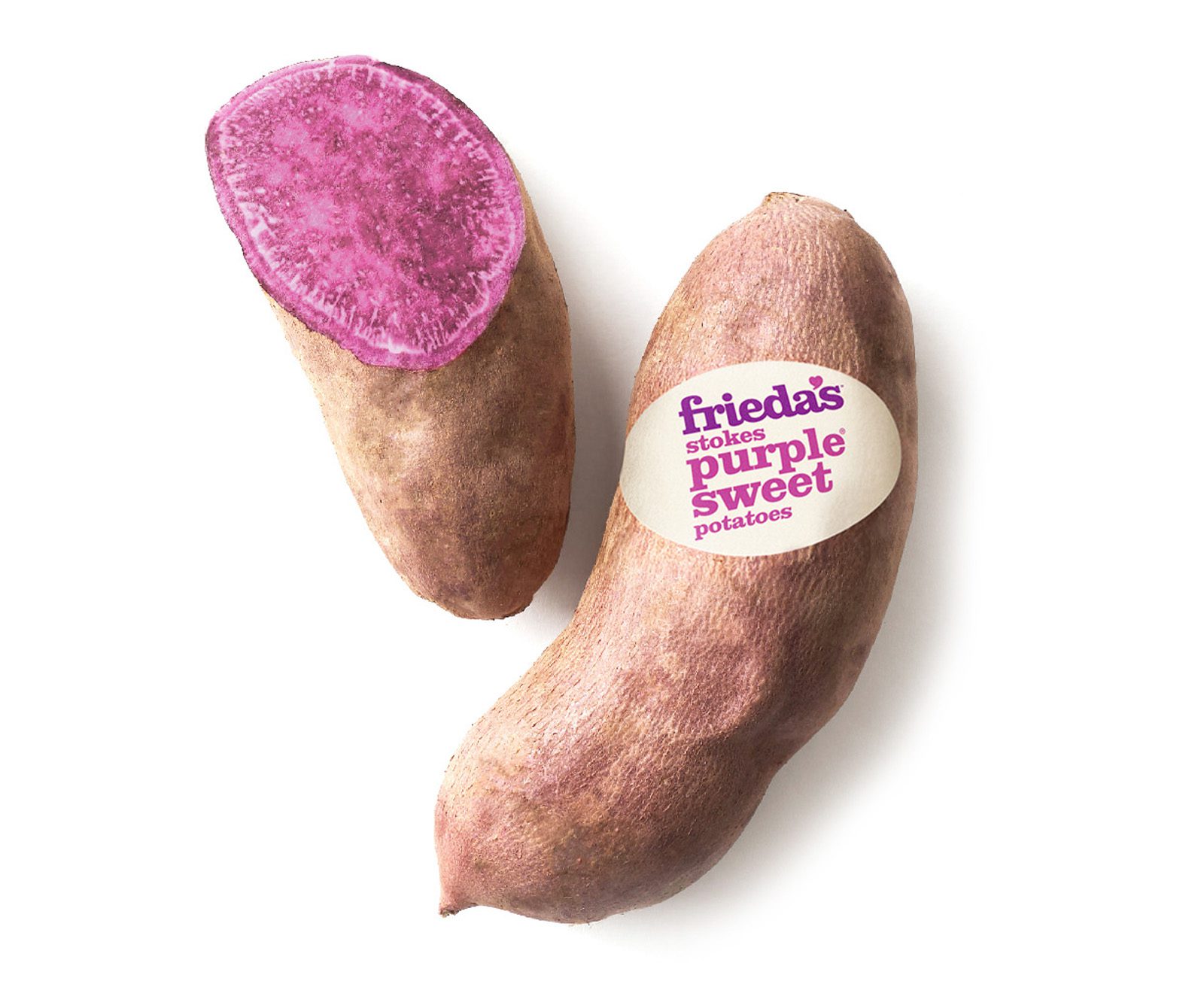 Some of our favorite ways to use Stokes Purple® sweet potatoes include sweet potato pie, served as a crostini, in stuffing, soups, curries and more!

Stokes Purple® sweet potatoes are available at grocery stores nationwide and on our website at www.friedas.com/shop. 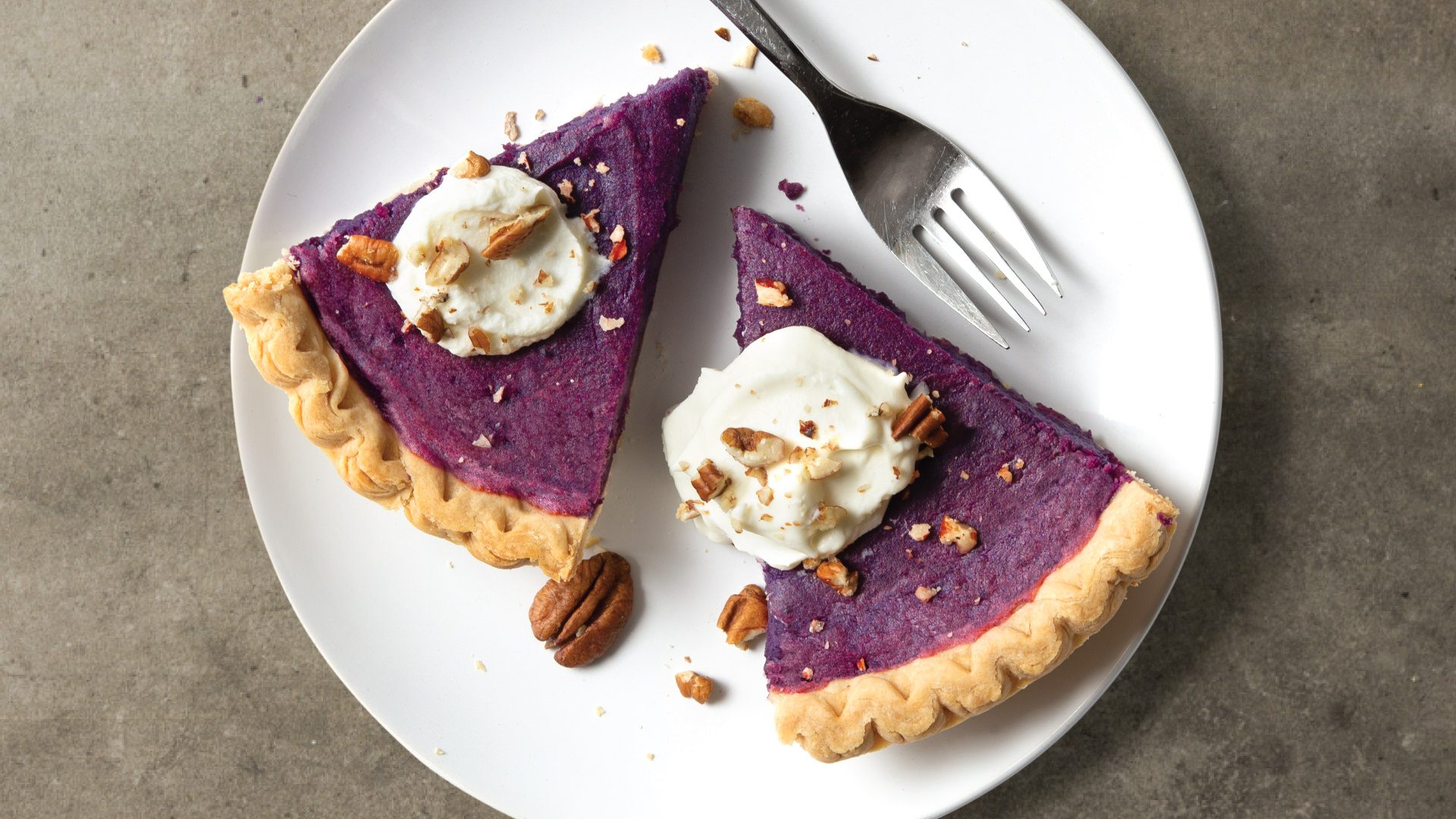 Believed to have come from Aztec South America with the Spaniards to the Philippines and China in the 1490s, the plant of these sweet potatoes did not reach Japan until the 1600s. The initial planting was in Okinawa—the southern island of Japan—before they were cultivated throughout Japan, hence the name. Eventually these purple tubers ended up in Hawaii and became a part of the native menu—they are also known as Hawaiian sweet potatoes. 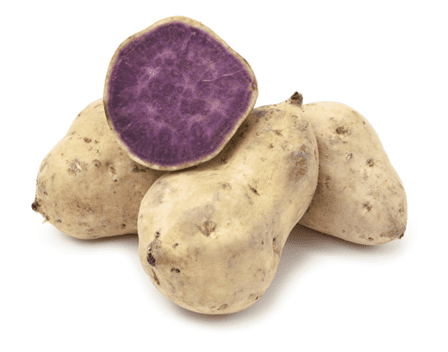 With a creamy, beige skin on the outside and lavender-purple on the inside, these sweet potatoes are grown in Hawaii for the U.S. market. Appearing blue-ish purple when cooked, Okinawan sweet potatoes have a delicate, slightly sweet flavor and creamy-yet-starchy texture. According to The Blue Zones written by Dan Buettner, consumption of these potatoes is correlated to a longer life.

Ube is commonly used in desserts all over the world—in ice creams, tarts and even donuts! Also known as a purple yam, ube is a staple of the Filipino kitchen and is well-loved all over Asia as a dessert ingredient for its sweet and nutty flavor.

With all the attention on ube comes the confusion about this elusive yam. (Yes, a true yam!)

First of all, ube is rarely available fresh in the States. Many people would argue that they indeed have bought some “ube,” but photographic proof usually shows they have purchased either Stokes Purple® or Okinawan sweet potatoes (or sometimes even taro root as it can be slightly pinkish on the inside).

This, folks, is fresh ube. 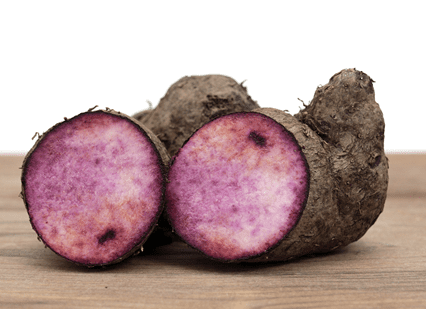 You can blame the misconceptions on the plethora of information and imagery on the internet. If you search for an image of ube yourself, you’ll understand the conundrum. Only when you search for ube’s botanical name Dioscorea alata will you find ube’s true form: a tuber with brown, bark-like skin and flesh that ranges from white with purple specks to lilac.

Now, the ube that is used widely comes as a jam (Ube Halaya) or in a powder, extract, or frozen form. It turns out that preparing these true yams is labor intensive and that is why they’re commonly available in processed forms.

Now, go forth and explore all the majesty of purple sweet potatoes!

To check out more of our Ultimate Guides, click here.