In a bracket-style tournament, Frieda’s team members faced off, using any tools of their choice from knives to a special coconut opening tool to open the young coconuts. For the finals, only knives were allowed.

Allen Demo, Director of Procurement and Sourcing, shocked the crowd when he opened the coconut in eight seconds with a single blow of a chef’s knife. He went on to win the competition.

“Allen has just returned from Thailand after a visit with our grower partner and touring the coconut groves, so I’m sure they taught him a few tricks,” said Alex Jackson Berkley, assistant sales manager, who lost to DeMo in the second round. “Was it an unfair advantage that Allen was trained by Thai farmers who trim coconuts for a living when the rest of us are taught by YouTube? Maybe.”

A few audience members were splattered with coconut shells and coconut water, but there were no injuries reported other than a slightly bruised ego of the second-fastest young coconut opener Matt Hubbard, Account Manager, who opened a young coconut in 10 seconds with a coconut opening tool.

About four months ago, I received an email from my daughter Alex:

The son of a friend of a friend is a third-year medical student who has a one month rotation at our local Los Alamitos Hospital. Do you know of a place where he could rent a room for a month?

As I pondered the email, I thought to myself—I live by myself in a multi-bedroom home. I’ve had interns stay with me before. Should I open up my home to a complete stranger?

After all, if my child were a third-year medical student and needed a place to stay, I would think it was awesome if a friendly family offered a rent-free home to stay in.

It took me just a few minutes to decide to offer that Nathan stay at my house.

We texted a couple of times and spoke for a few minutes the weekend before he moved in. Up until that point, I had never met him in person.

What a nice guy, and what an awesome experience for both of us!

Nathan is 25 years old and studying to be a doctor of osteopathic medicine at Western University of Health Sciences. In their third year, medical students do month-long rotations at various hospitals to experience a variety of medical fields. His first rotation while living with me was in internal medicine. He actually ended up staying another month to complete his next rotation in surgery.

I haven’t lived with anyone for a few years, so it was interesting to get up in the morning and have someone join me for coffee and breakfast.

The best part is when we meet at home in the evening and talk through our day. I find his stories about various patients interesting. During his current rotation, his descriptions of surgeries he’s witnessed intrigue me.

During the last two months, we’ve also talked about how important bedside manner is. And how you talk to a family after someone passes away (fortunately, he is quite empathetic). And how frustrating it is to work with a doctor who is ridiculously impatient and demanding.

Nathan will be moving out this weekend; I think we are both a little sad. He is paying for his entire medical education himself, so he has expressed immense gratitude for his stay at my house gratis. For me, it was a gift to spend time with a young person at the very beginning of his career, and to be reminded of the fun of having a housemate for a short period of time. (I still appreciate my solitude, which I use to breathe deeply and decompress from my daily toil.)

If you ever have the chance to host a student for a few weeks, I highly encourage it. In addition to helping them by providing a safe, clean, friendly place to stay, it is a way for you to step outside your normal schedule and circle of friends.

In August, I will be hosting up to four students for a week, while the International Maccabi Youth Games are held in Orange County! I’m excited to have the energy of students in my home again. 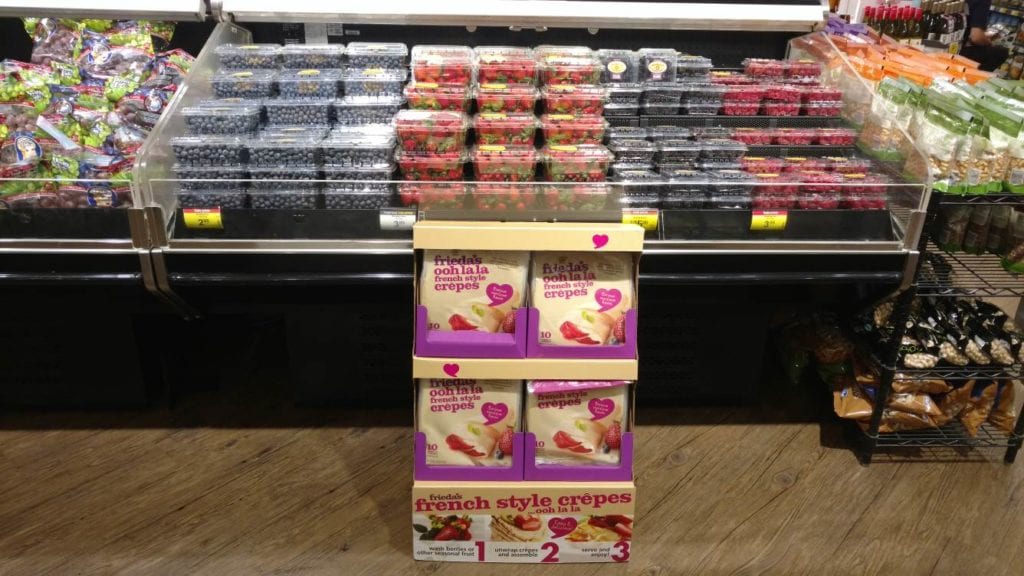 “Shoppers picking up strawberries can be enticed to also pick up the ready-to-eat crêpes displayed nearby and vice versa,” said Alex Jackson Berkley, assistant sales manager at Frieda’s Specialty Produce. “Mother’s Day is a special occasion and shoppers are always looking for an easy option for something special to make an impressive meal.”

“Our display unit is designed to showcase the crêpes without interfering with other items,” said Berkley. “The display unit’s bright color and attractive design draw in shoppers to the area.”

Frieda’s is now taking pre-bookings for these crêpes shippers. Call today to take advantage of this Mother’s Day opportunity.

“The coolest thing is that after more than 50 years, the business remains family run,” said David Whiting in his March article in the Orange County Register.

It was a pleasure to have David and Cindy from the Orange County Register spend the day with Frieda and the Caplan family!

With 16 years of experience in Marketing Strategy, and Marketing Management and Innovation, Sherman has innovated for Consumer Packaged Goods companies such as PepsiCo, Wrigley, and most recently, Starbucks, where she launched—in the grocery aisle—Starbucks Plus K-Cup Coffee with twice the caffeine and managed the Teavana Hot Tea business within Starbucks retail stores. Sherman has deep innovation experience, having built new product pipelines across the coffee, confections, snacks, and juice categories. She applies her background in design thinking to all of her innovation and marketing challenges.

“We are thrilled to welcome Cindy to the Frieda’s family,” said Karen Caplan, President and CEO of Frieda’s. “Her entrepreneurial spirit elevates our innovative culture and her CPG experience gives us a fresh perspective to improve how we can go above and beyond for our clients.”

Sherman has a bachelor of science in Marketing from Rutgers University and an MBA from Haas School of Business at University of California, Berkeley. She relocated from Seattle, Washington, to Long Beach, California, with her family in March.

In the summer after my sophomore year in college, I was working on the Los Angeles Wholesale Produce Market for my mom. Early one morning, this guy came by with a group of Japanese visitors. He told me that he had a tour set up of the market, but the tour guide never showed up. So, he decided to direct the tour himself! When he came to our stall, I didn’t know who he was, so I tried to sell him some kiwifruit!

It turns out that guy, David, was a graduate student at the University of California, Davis, in the Agricultural and Resource Economics department. That was the same college I was attending in the same major.

That was the beginning of a lifelong friendship between David and me. When he graduated from UCD, it was I who drove him to the train station so he could ride the train across the country to catch a ship in New York and sail across the Atlantic to England for his post-graduation trip through Europe.

David ended up moving to Seal Beach, California, a few miles from where my parents lived, and we would occasionally have dinner together. Then he started an insurance agency and over time, he became our company’s insurance broker.

When he got married, I was at his wedding. (His wife’s name is Karen, so I would always be known as “the other Karen.”)

As we had children, our families spent Memorial Day together each year. And whenever David came to my office for our annual insurance renewal, we always went to the local Original Fish Company restaurant, often discussing politics. He was the only person I ever openly talked politics with.

A little over two years ago, David called to let me know he was diagnosed with pancreatic cancer. Ever the optimist, he told me his prognosis was good. Over the months, we checked in via phone or email for updates on his treatment.

Eight months after his diagnosis, he was ecstatic that he and his youngest son were able to attend my daughter Alex’s wedding. It seems like David was always at our family’s life-cycle events, bat mitzvahs, a wedding, fundraising dinners, birthday parties, and more.

About 10 days ago, David and I spoke on the phone. He told me “he was running out of runway” and we reminisced about our fun conversations over the years. I could tell he was in a lot of pain. When we hung up, I had tears streaming down my cheeks, as I knew that was our last conversation. And this past Saturday evening, I received a message from his family that he had passed away at age 65.

I have never experienced the death of a close friend before. So many of us will experience this more and more, so I wanted to share a few of my revelations and learnings:

I know each person reading this will experience the passing of a dear loved one in the future. We all experience death in our own way. My memories are filled with happy thoughts of our first meeting back on the Los Angeles Produce Market and our silly conversations over the years. Although tears may be running down my cheeks, my heart is happy knowing that I made the time to have that last conversation and nothing was left unsaid.

As a Jewish saying goes, may his memory be a blessing.