In early June, I was having dinner at the Japanese-Peruvian fusion restaurant Chotto-Matte, one of the hippest places in London. Imagine sushi meets root vegetables—on steroids! It was one of the most amazing, enjoyable, and inspiring dinners I’ve had in a while.

Yes, that was in England, which in the past has not been known for the most adventurous cuisine. (Fish and chips and meat pies, anyone?)

So, out came a plate filled with thin, roasted green peppers. I said, “Oh, look at these Shishito peppers!” My friend gave me a quizzical look and said, “But the menu says they’re Padrón peppers.”

Hmm…I wondered why they looked and tasted just like Shishito peppers, which I have enjoyed many times at my favorite sushi bar back home in California. So, I immediately texted my chile pepper buyer and asked him, “What is the difference?”

Almost all commercially sold peppers are “cousins.” In fact, both Shishito and Padrón peppers are from the cultivar Capsicum annuum var. annuum.

Shishito peppers are the East Asian variety of the cultivar and are named because the tips of the peppers resemble the head of a lion—shishi (or jishi) in Japanese.

On the other hand, Padrón peppers are from Spanish seed of the cultivar from the municipality of Padrón in northwestern Spain, hence its name.

You can see from the photos that Shishitos are a little thinner than Padróns. Also, Shishitos are not usually hot—you may find 1 in 10 that is medium-spicy. Padróns are also mild with slightly more chance of being spicy—2 in 10.

Both peppers are very trendy right now, along with the rise of tapas bars, izakayas (Japanese bars with food), gastropubs, and small plate offerings. So, don’t be surprised if you find them showing up in your neighborhood establishments.

Shoppers’ favorite grapes are in good supply through August

LOS ALAMITOS, CA (June 2015) — Packed in a 16/1 lb. clamshell, Frieda’s Specialty Produce’s Champagne Grapes are available starting in July. Although Champagne Grapes from Arizona experienced a gap in mid-June due to rain, Frieda’s will still have good supplies of shoppers’ favorite table grapes from California through August. 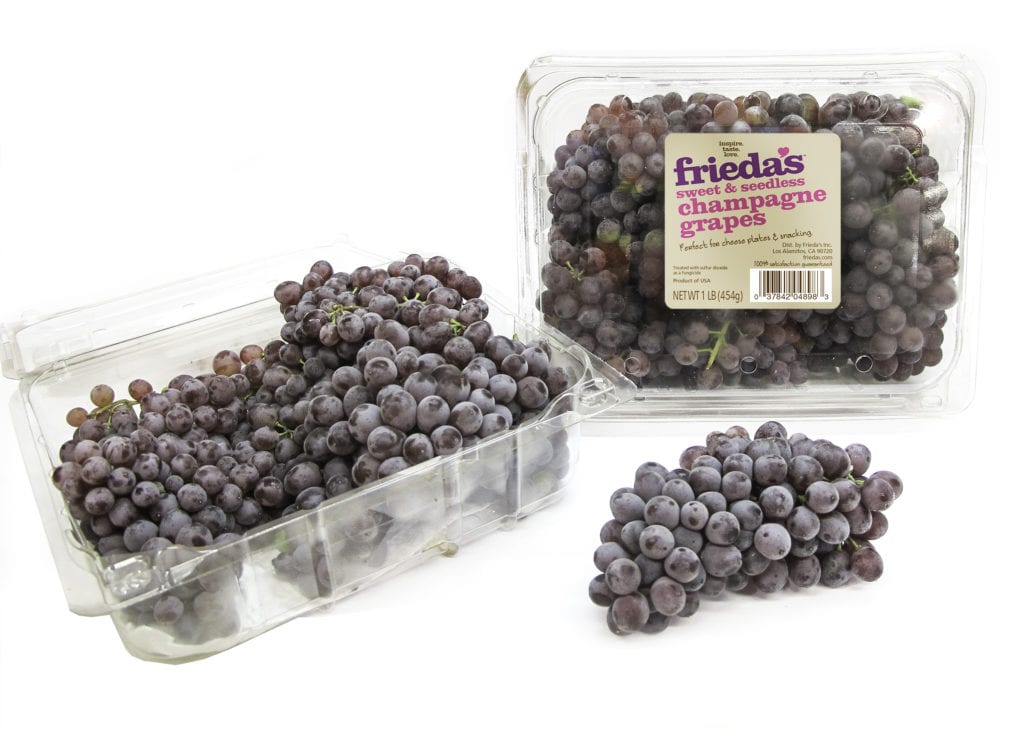 Also known as Zante Currants or Black Corinth Grapes, Champagne Grapes have a delicate appearance and intensely sweet flavor. They are small and seedless, and the average size of a bunch is about the length and width of a hand. Frieda’s recommends displaying Champagne Grapes with other grape varieties, including seasonal specialty varieties such as Sweetie Yellow Grapes and Thomcords. Champagne Grapes can also be cross-merchandized with gourmet cheeses and wines for entertaining ideas.

Interested retailers, wholesalers, and foodservice distributors can contact Frieda’s for product information and high resolution images to assist with any marketing needs.

Last week I had the opportunity to share my thoughts, and a bit of my personal history, with a few hundred produce friends—both men and women—at the Women in Produce Reception at the annual United Fresh Produce Convention in Chicago.

For most of my life, I have told my company’s story and the story of how my mother founded our business, but never before have I talked about what it was like to grow up as the daughter of entrepreneur Frieda Caplan and labor negotiator Al Caplan.

Most people think my mom was a tough business person, but she was a pushover compared to my father. His mother died when he was 13, after which he rode a freight train from Chicago to California, so he never graduated from high school. He was a labor union negotiator and eventually moved into labor relations management consulting. He may have been tough at work, but he was tougher on me, the first born. But obviously that toughness just prepared me for running our family business and dealing with everyday business challenges.

One of my professional highlights was when I was chosen to be a Director of the Federal Reserve Bank of San Francisco, Los Angeles branch. It was an interesting time to be at the monthly meetings and voting on the Fed rate. I had the opportunity to meet many interesting people, including then Chairman Alan Greenspan and current Chair Janet Yellen.

Many times when I speak, I get asked my advice for being successful in business. So at the end of my presentation, I shared these tips:

Balancing your work and your life is up to you. Think of each day as a “pie.” You wake up each day and get to decide how to divide the pie. Will the pie today be evenly divided between work and family? Or will it be primarily work, or primarily family, or just a “you day?” It was explained to me this way by a female executive at Walmart, and to me it makes the most sense. I will tell you that I am pretty sure I missed the first day of school every year for both my girls as it always seemed to fall during a scheduled business trip. But I was there for their third day of school. And I missed many birthdays, but we made lots of other memories. And as you can see, my girls turned out just fine.

When you don’t know something, ask. Don’t be afraid. I guarantee that you won’t look dumb. To the contrary, you will be admired for having the guts to ask the questions everyone else wishes they had asked.

Ask for what you want and set high goals for yourself

And be prepared to get feedback on what you have to do to get there.

Be a lifelong learner

In my more than 30 years in the business, every year I have attended workshops, seminars, webinars, and read books to keep current and learn about new things. I read everything that comes into my company even if it takes me weeks and months to get to it. (Thank goodness for long airplane flights). Because I always learn something new, I feel ahead of the curve and that is one of my competitive advantages.

And finally, this is something I learned from my mother (and she learned from her mother). It’s tempting to badmouth your competition, your coworker, or your boss. But really it is better that you don’t. Offering honest criticism is one thing, but like the saying goes, “If you don’t have something nice to say, don’t say anything at all.” We will all be in this industry for many more years, and you never know who you will be working for or who will be your boss. I’ve found it the best practice to be positive whenever possible.

The best part of my presentation was that my entire immediate family was able to be there with me. As you can see, I have a beautiful and radiant family.

Please feel free to share my tips with any young person who has just graduated and is moving into the “real world.” You can also read my entire speech here.

Four more videos are planned for this season.