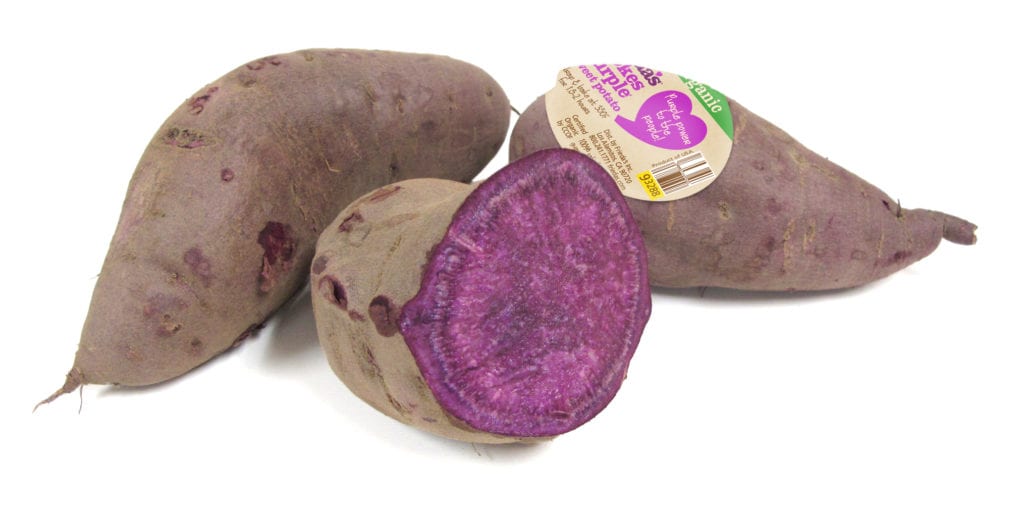 LOS ALAMITOS, CA (September 2016) – Shoppers around the world are discovering the potential health benefits of purple sweet potatoes, thanks to media coverage by a recent BBC documentary series and research from the Blue Zones organization.

“After the program aired, we were deluged with emails from people in the U.K. and the U.S. looking for purple sweet potatoes,” said Karen Caplan, President and CEO of Frieda’s Specialty Produce. “Our California-grown Stokes® Purple sweet potatoes are a different variety than the Okinawan sweet potatoes, but they actually have an even darker, vibrant, purple flesh.”

Blue Zones, an organization founded by National Geographic fellow Dan Buettner, is another source of information about the Okinawan diet—a diet specific to an island in Japan—and purple sweet potatoes. Buettner has written three books on the topic of how lifestyle and diet impact longevity.

In addition to vitamin C, fiber, carotenoids, and slow-burning carbohydrates, researchers believe that the presence of anthocyanins, the natural phytochemicals that give purple sweet potatoes their deep violet color, may be the key. Numerous studies have shown that anthocyanins may have disease-fighting properties.

The beige-skinned, lavender-fleshed Okinawan sweet potato is available on a limited basis in the U.S., as it is typically grown in Hawaii and must be irradiated before reaching the mainland.

“Our goal is to have Stokes Purple® sweet potatoes available year-round,” said Caplan. “But because they are so popular, we tend to sell out before summer begins.”

Fire Dragons™ are in Season Limited-Edition Angelcots® have arrived! this summer it’s all about trendy tropicals

Fire Dragons™ are in Season Limited-Edition Angelcots® have arrived! this summer it’s all about trendy tropicals