Frieda’s Predicts 2018 Will Be the Year of Jicama

Los Alamitos, CA (November 2017) – Supermarket shoppers will be perusing the produce aisles in search of new flavors and food experiences in 2018. Brick-and-mortar retailers with the right item mix can take advantage of this experiential path to purchase in ways that no online shop can offer.

Frieda’s Specialty Produce calls out five items that can add value to produce departments by attracting those key consumers who seek experiences in food and like to travel with their taste buds. 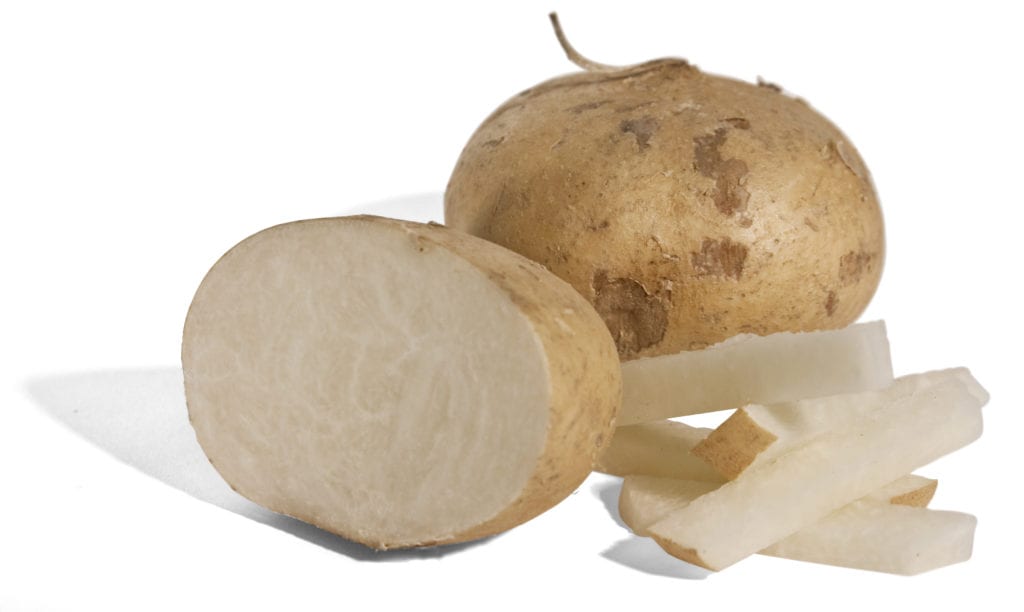 “I believe 2018 will be the year of jicama,” said Karen Caplan, president and CEO of Frieda’s, who noted that more retailers are offering fresh-cut jicama sticks than ever before. “It has only taken 45 years for jicama to become a household name since Frieda’s introduced it to produce retailers in 1972!” The Whole Foods 2018 trend report also called out shaved jicama as a vegetable alternative to grain-based taco shells.

Frieda’s also sees jicama in a position for growth in the super-foods category, thanks to its excellent nutritional value, which includes a high level of vitamin C and gut-friendly properties. San Francisco-based food development firm Mattson identified healing foods as a trend from the 2017 Natural Products Expo East. The natural sugars and fiber in jicama are considered a prebiotic for the digestive tract, meaning it helps create the right environment for good bacteria (probiotics) to flourish in the gut.

“With all the research and development in the field of the gut microbiome, I believe that produce like jicama and Sunchokes® will continue to be in high demand for 2018 and beyond,” Caplan said.

Now available in a rainbow of colors, mainstream U.S. consumers are really catching on to dragon fruit, also known as pitaya. They have seen dragon fruit in flavor and fragrance marketing, and frozen in smoothies, and now they are finding it fresh in their supermarkets as multiple countries are supplying the U.S. marketplace with various skin colors, varieties, and internal flesh colors. For example, Israel exports several different varieties, including a unique desert-grown type with a pine cone-like shape and high flavor. Nicaragua exports a rounder-shaped, deeply pigmented, red-flesh variety. And Vietnam exports a large white-flesh variety with high visual appeal and long brachs (leaves).

The mother of all tropical fruits has attracted quite a fan base over the past two years, thanks in part to its use as a meat texture substitute, similar to pulled pork, when unripe and green. However, Frieda’s “trendologists” believe the sweet, complex flavor of the ripe jackfruit has yet to be discovered by the masses.

“Ripe jackfruit is enjoyed in Asia as a snack or dessert. It has a delicious sweetness reminiscent of Juicy Fruit gum,” said Berkley. “In 2018 we expect to see more savvy retailers offering ripe jackfruit sections, overwrapped, in their fresh-cut coolers.

“We also discovered that the jackfruit’s large seeds are edible when cooked, and may be ground into a flour to use in baking,” Berkley added. Frieda’s expects to see more exploration in the use of jackfruit seeds, as it aligns with two emerging food trends: alternative flour sources and root-to-stem cooking.

“Whole Foods called the purple food trend in 2017, but Frieda’s has been promoting the purple produce movement since 2012, and we believe it’s still trending up,” Berkley said.

More consumers are learning about the role of anthocyanins—the natural purple pigment found in produce—and other micronutrients in their health. Frieda’s Stokes Purple® Sweet Potato is one example of a vegetable loaded with anthocyanins, while purple-skinned fruits, such as concord grapes, share a similar benefit.

The Packaged Facts 2018 food trends forecast also claims, “Color is the new sugar,” pointing to naturally vibrant foods like beets that act like eye candy. In addition, Packaged Facts identifies sweet potato as a 2018 culinary star and another way to add color to vegetarian and vegan plates.

Still on the rising trend train for 2018, turmeric has caught on with early adopters for its anti-inflammatory health benefits. With the increase in supply to the U.S. market from growers in Jamaica and Fiji, more supermarkets are stocking this healing root.

“We continue to see fresh turmeric as an ingredient in fresh-pressed juices and smoothies, and even lattes,” Berkley said. Roots like fresh turmeric and ginger have been prized for centuries for their medicinal properties. “With the rise in the #selfcare movement, this buzzword often equates to people turning to natural remedies and fresh whole foods,” she added.